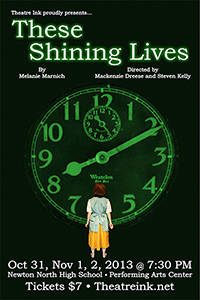 THE STORY: THESE SHINING LIVES chronicles the strength and determination of women considered expendable in their day, exploring their true story and its continued resonance. Catherine and her friends are dying, it's true; but theirs is a story of survival in its most transcendent sense, as they refuse to allow the company that stole their health to kill their spirits—or endanger the lives of those who come after them.

"[Marnich] has an ear for warm, natural dialogue that eschews snarky quips and truisms…the play's linguistic honesty satisfies." —Time Out NY. "…has a humanistic glow…clockwork precision…an initially comic and ultimately tragic look at how individual women find employment within a system more concerned with profit than safety." —Variety. "Perfect, touching and wistful…beautifully tragic." —Talkin' Broadway. "…subtly stylized language and a sensibility that's delicately oddball, even when probing troubling topics." —Washington Post. "The stakes could not be more vividly portrayed. [Catherine's] courage shines brighter as her body weakens. Still, we leave the theater aching from the impact of this true tale, which only gains power from the artifice of its telling." —ExpressMilwaukee.com.
Tickets $7.00 at www.theatreink.net